Auto-Programmable The remote control can be registered in the receiver without the need of the original remote control, as long as radio communication is activated and the memory is not full.

If the process does not work, test the standard method using the original remote control or gaining access directly from the receiver. 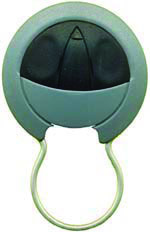 1. Stand near the receiver (1-2 metres) with the synchronised device.

2. Press and release buttons 1 and 2 simultaneously.

3. The LED on the remote control will light up after two seconds and turn off.

4. When the LED on the remote control lights up again, simultaneously press buttons 1 and 2 and hold until the LED begins to flash.

5. When the LED stops flashing the remote control will activate the synchronisation mode of the receiver.

6. The receiver will remain in synchronisation mode for around 10 seconds.

7. Press one of the buttons on the remote control to be synchronised.

8. The receiver will save the code.

Direct synchronisation procedure on the receiver

1. Connect the receiver to the power supply.

2. Press the ENTER RADIO button. All the red LEDS will light up for 2 seconds, after which only the first LED will remain lit.

3. Press the \"SET\" button repeatedly to select the relay you wish to associate with the transmission.

4. Press the desired button to transmit the code. Each button (channel) transmits a different code.

a. The LED flashes slowly during synchronisation and remains steady once the operation has been successfully concluded.

b. If a LED begins to flash quickly, it means that this channel has already been synchronised and associated with the LED concerned. Repeat the operation to change allocation of the relay prior to the one currently selected.

c. If all the LEDS flash at once it means that the memory is full. The code has not been stored.

5. Repeat the operation for all buttons (channels) you wish to synchronise, always selecting the relay to which they are to be associated.

6. Repeat the operation for all the remote controls you wish to synchronise.

8. The codes are stored and will not be deleted even in the event of a power cut. 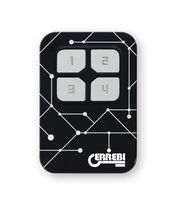