The first remote with no manual adjustments in the duplication process. 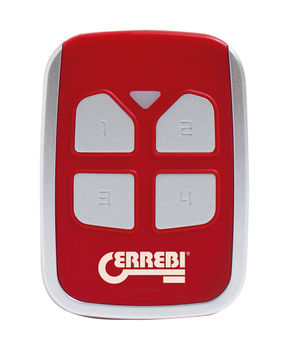 — Frequency and power auto adjustment with no manual operations.

— Optional connection with a Pc to work with jmaremotesPro software.

A SINGLE REMOTE CONTROL FOR ALL FRQUENCIES, without having to change the quartz crystal.

It copies 95% of fixed codes in the market

1. Hold buttons 1 and 2 of the JMA remote control simultaneously pressed for 5 seconds until the green Led flashes

2. Release and wait for it to go out

4. The green Led will remain on

5. Position the two remote controls on a flat metallic surface facing each other at a distance between 1 and 2 cm

7. The remote control will switch off indicating the copying has been correct

In the case of changing the quartz piece, follow these steps for its adjustment:

1. Interchange the piece according to the necessary frequency

2. Position the jumper according to the range of frequency

3. After that, adjust the power of transmission

- Press the rear button of the M-Q twice

- After having passed 20 seconds, the Led will light blue again for 1 second and then switch off If you did not enough time to adjust the power, re-press the rear button and we will have another 20 seconds.

READ MORE
This website uses its own cookies and cookies from third parties in order to optimise your browsing experience, better meet your needs, and perform analytical tasks. By continuing to browse you accept our Cookies Policy.ACCEPT